It was an incredible feeling, running and sliding in snow so fresh and thick that you could not feel the concrete sidewalk beneath you.  The university was closed for semester break, but as the newly falling snow rapidly accumulated throughout the early evening, it only seemed appropriate to head out later in the dead of night to the center of campus and enjoy the snowfall.  First, we engaged in snowball fights with folks passing by.  Soon afterwards, we were running and tackling each other in the soft piles of snow.  The snow was really incredible; it was so soft, so thick and so fluffy that it seemed just like cotton.  The funny thing is, I hate snow and cold weather.

Still, almost thirty year later, I have to admit, it was quite an evening.  Unfortunately, most off my other memories of growing up in cold Midwestern winters are not so fond.  I did not ski or play hockey, and I do not believe snowboarding was even invented when I was in school.  For the most part, my memories revolved around shoveling snow and trying to warm up my car so the windows would not freeze on the inside as well as the outside, a problem that particularly plagued heat-deficient VW Beetles.  How I lived through two dozen Midwest winters, I’ll never know.

In comparison, Pacific Northwest winters are generally warmer than those in the Midwest.  Although quite damp, temperatures normally stay above freezing for most of the season. Nonetheless, it is still not my favorite season.  Temperatures may not be as cold, but when combined with the rain and wind, winters are still unpleasant enough that I am not really interested in doing much outdoors between December and March.

Having said that, I am still not certain what happened about ten years ago when I took an interest in the region’s annual winter bird migration.  Between December and February, thousands of geese, swans, eagles and other migrating birds descend upon Puget Sound, especially in an area north of Seattle known as the Skagit Valley.  Depending on where in the valley one heads to, it is possible to encounter dozens of bald eagles dining on salmon attempting to swim up-stream, several hundred tundra and trumpeter swans gracefully flying in at out of fallow farm fields, or thousands of snow geese descending upon a preserve on the north shore of Skagit Bay.

Like many an obsession, I suspect that it all began quite innocently.  A photo of the migration in the daily newspaper, or a detour through the Skagit Valley on the way home from a day trip further north which afforded many a view of the birds from our car.  You didn’t even need to stop or get out of your car when you stopped at the main wildlife preserve.  The birds would congregate in the field directly in front of the parking lot.  How convenient, I thought, an outdoor winter activity that did not actually involve being out in the cold weather.  That is, of course, until I saw, and heard, an entire field of geese take flight at once.  Thousands of them filling the sky and creating a thunderous sound like no other.  An experience like that, my friends, requires more than a drive-by.  I was hooked. 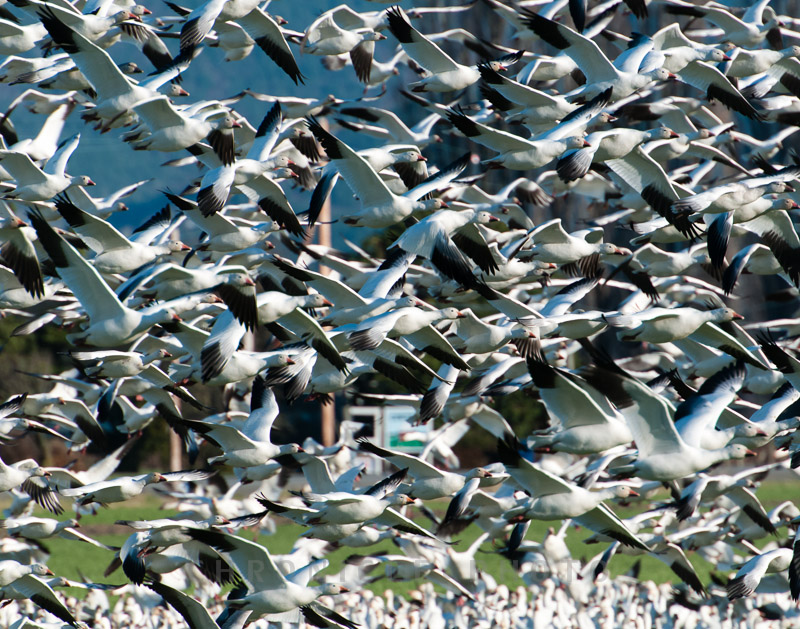 Between 2004 and 2010, my desires to witness and photograph this experience each year continued to build, as evidenced by the two photos above.  What started out as a simple visit to the valley slowly turned into an all day adventure from sunrise to sunset.  Gear used for photographing birds in flight slowly began to make its way onto my wish list, and eventually into our house.  And, as the fall of 2011 slowly began to close and the last pieces of gear arrived, I vowed to embrace Pacific Northwest winters and all the beauty that mother nature offered during these cold, wet days.

Soon, I imagined, I would be donning many layers of fleece and Gore-Tex as I undertook my new winter ritual, a real wild goose chase.  Or so I thought.  As that last piece of photographic equipment arrived, so did a major change in my health, and not for the better.  In short, I would not be chasing wild geese in 2012, but rather I would be spending my time chasing a menacing tumor from my body with large doses of chemotherapy drugs.

Thankfully, my efforts to chase away that tumor were successful, but success often comes at a price.  Among other things, I developed Raynaud’s Syndrome in my hands.  Exposed to the slightest bit of cold, my fingers lose all circulation, turn as white as a ghost, and became numb and painful.  Clearly my plans to photograph birds in the winter months was going to need some rethinking.

2013, take two!  I was ready for this re-match with more gloves and mittens at my disposal than you could imagine.  Unfortunately, this re-match, too, had to be postponed.  Game called on account of cancer, again.  So, back to cycles of chemotherapy, and a good dose of radiation to boot.  This treatment was also declared successful, and thankfully, my hands seemed no worse for the wear, although they were certainly no better.

So, feeling a bit like Charlie Brown wanting to kick that football, I was determined to head off on another goose chase this winter.  2014, take three!  Armed not only with my gloves, I was now also packing two rechargeable hand warmers as I enlisted a friend to join me on this year’s goose chase.

Well, while my friend and I were ready, it seems that somebody forgot to remind the geese.  We headed out on what was one of the most sunny and warm winter days that I can recollect, but not a goose was to be found.  And the few swans that we did see, like those below, were few and far between.  Not wanting to waste beautiful day, we still photographed throughout the Skagit Valley, but saw nothing like the photos I had previously taken above.  I am not sure if the flocks arrived and departed early this year, but no geese were to be seen at the usual places.  Even a second visit several weeks later confirmed their absence.  Nonetheless, the Skagit Valley is still a beautiful place to wander through, and I highly recommend it almost any time of year, as evidenced in the photos below. 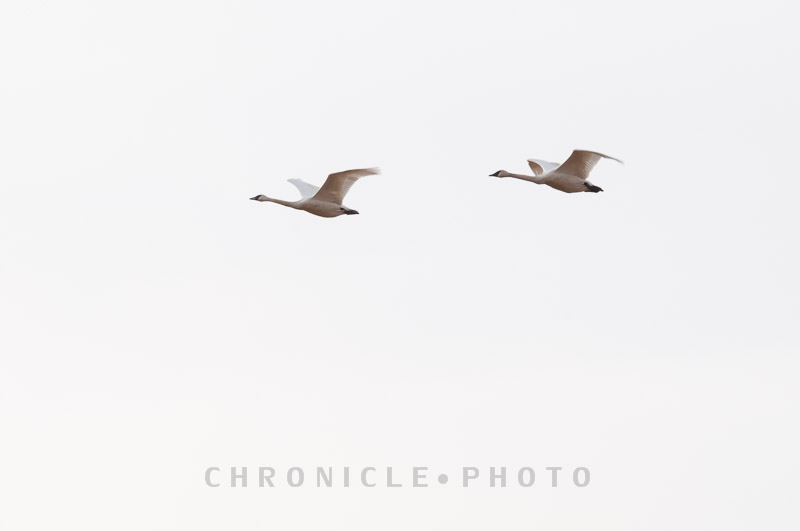