It has been several months since I have been able to post, and I was very excited with the prospect of putting up a small series of them after being on holiday in Hawaii with my beloved a few weeks ago.  It was our first time visiting the islands, and it was a long overdue trip that was all but prescribed by my medical team in their effort to grant my body a bit of greatly needed rest and recuperation these past few years.  We returned feeling somewhat rejuvenated, but, as is often the case in my life, health, work, and personal obligations quickly made claim to my schedule, leaving me with little time to edit images and draft a post or two.  But, as I was culling through my images at the beginning of the weekend, including those from our visit to the USS Arizona Memorial (aka World War II Valor in the Pacific National Monument) and the National Memorial Cemetery of the Pacific (aka Punchbowl National Cemetery), I thought I would kick off this series by honoring the holiday with a few images as we reflect upon those who have given their lives in service to our country’s armed forces.

National Memorial Cemetery of the Pacific:

It is not often that I visit national cemeteries, and the last time I can remember doing so was a visit to Arlington National Cemetery around 1973.  I was young at the time, and my primary recollection was The Changing of the Guard at The Tomb of the Unknown Soldier.  The tremendous sacrifices made by those buried at Arlington, however, was not a concept that was fully understood in the mind of a grade school student.  It was not until 1986, and then again in 2005, during trips to northern France that I had wanted to visit a national cemetery.  Alas, neither trip allowed me the opportunity to visit any of the US cemeteries in or around Normandy.

We had not originally planned to visit Punchbowl, but we found ourselves in the area with some unscheduled time, so we took advantage of the opportunity.  Sitting high above Honolulu, it is a place that while solemn, is also quite beautiful and serene.  Flanking the far end of the cemetery is the Honolulu Memorial which includes the famous statue of Lady Columbia (as seen in the open credits of both the original Hawaii Five-0 and the remake Hawaii Five-O).   Behind Lady Columbia in the Court of Honor are a small memorial chapel and map galleries that contain an extensive series of large wall mosaics that depict various battles in the Pacific during WW II and Korea.  The mosaics are quite an impressive work of art and not to be missed if you are able to visit. (Note that the Vietnam war was not included in the galleries as the mosaics were installed beginning in 1968.  The war, however, is accounted for elsewhere in the Memorial.)

As lifelong student of history, I suspect that I first learned of the Memorial in the early 1970’s around the same time I visited Arlington.  My understanding of the memorial, though, like my visit to Arlington, was also somewhat abstract.  My readings on Pearl Harbor mostly centered on the events surrounding the attack, as well as its role in plunging the US into WW II.  Since the Memorial was not built until 1962, I never considered it within the context of the war.  I knew that it existed, and that it was an architectural icon among America’s national monuments, but that was all.

We visited the Memorial the day after our visit to Punchbowl.  It was early on Sunday morning, and crowds were already starting to form.  Entry tickets are timed, so you join a large group to see a short video before boarding a small shuttle that ferries you out to the actual memorial site.  The memorial is quite a popular national monument, so the crowds do put a damper on being able to quietly reflect during your visit.  Thankfully, you are no longer required to remain in your initial group after arriving, so despite the large numbers of people, you can at least stay as long as you like and board the next return shuttle when you wish.

Like Punchbowl, visiting the Memorial is a somber experience, as you are literally standing over the tomb of 1,177 servicemen.  But, it is also somewhat surreal.  When the USS Arizona sank, she had a full complement of bunker oil, estimated at approximately 1.5 million gallons.  Approximately one-third of that was lost in the attack, and another third leaked out over the following few weeks, leaving nearly 500,000 gallons of bunker oil still in the ship.  To date, approximately one to two quarts of oil slowly leak from the hull each day, and are referred to as the “tears of the Arizona” or the “black tears of Pearl Harbor”.  Baring any unusual circumstances, this oil leakage is expected to last for hundreds, if not thousands, of years.  A somewhat haunting and sad reminder of those entombed in the ship.

I had heard about the tears before our visit, but seeing them was quite a moving experience.  A few large drops of oil suddenly emerge in the clear water along side of the Memorial  As the oil is quite viscous, it is slow to break up on the surface of the water and is somewhat mesmerizing to watch.  But, it does eventually dissipate over a larger area, leaving amorphous patches of rainbow colors on the water.

I had wanted to convey this sad, but unique, phenomena through an image, so I shot a number of photographs hoping that one or two would make the cut.  Photographing random spots of oil on water and having it convey any sense of meaning is a bit of a photographic challenge, so I tried not to set my hopes too high.  I would have been happy if an image or two was able to clearly convey this unique event without looking like an accidental press of the shutter button.  I can only say that I was quite surprised when viewing my images upon our return.  Several images did look like black tears, but a number also seemed to convey sad faces on the water’s surface.  The images reminded me of The 36 Unknown, a very moving body of work by one of my photographic mentors, Todd Weinstein.

I had not seen these faces while I was photographing, but they were so compelling upon later review that I decided to share them as we reflect on the meaning of this holiday weekend. 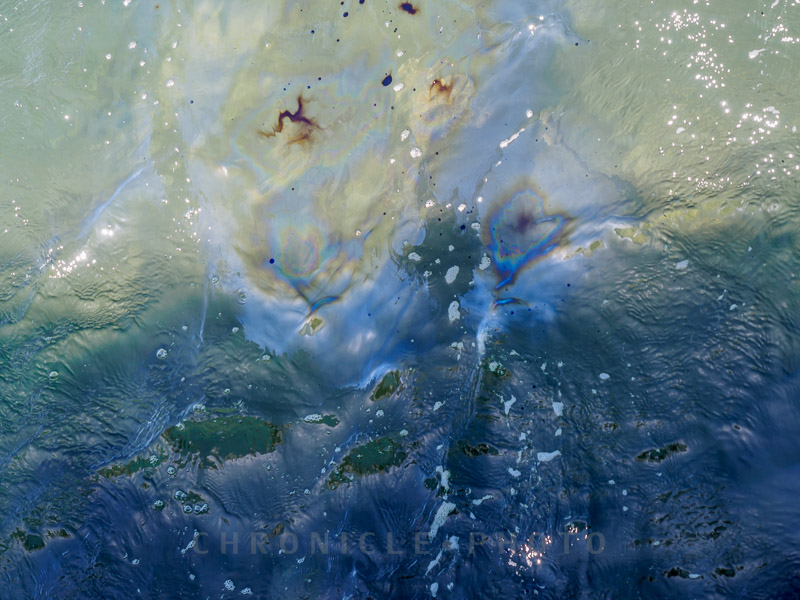 I have been very fortunate in not having lost any close family or friends to war in my lifetime.  Nonetheless, I am acutely aware of the losses of those who serve in the armed forces, and the tragedies caused for so many families, friends and loved ones.  As this holiday weekend, and this post, wrap up, I will close with a photo of a quote from a poem by Archibald MacLeish that is carved in one of the walls at Punchbowl.

The Young Dead Soldiers Do Not Speak, 2015